A handful of gem lapidaries around the world marketed tanzanite in the late 1960’s. The gemstone found its way to New York where Tiffany made the stone famous.

Tanzanite has what many would consider the finest blue hue in the world of gemstones. It has the ability to make even the most beautiful sapphires appear to be lacking in colour. As a result, tanzanite jewellery has gained momentous popularity, and tanzanite has become one of the world’s most coveted gemstones. 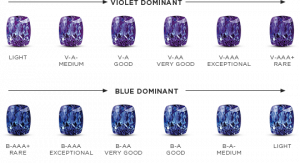 Tanzanite is native to Tanzania and no other place in the world has this precious stone. These stones can only be found in a 4km strip of land on the outskirts of Mount Kilimanjaro. Because tanzanite comes from a single source, they are estimated to be 1,000 times rarer than diamonds.

Gemologists believe that at the rate tanzanite is getting mined, they will be depleted. Rough tanzanites might only be available for 10 or 20 years. After that, no more new stones will be available. The stone will become extremely precious and only a select amount of people will be lucky enough to have one of these magnificent gems in their possession.

By clicking “Accept All”, you agree to the storing of cookies on your device to enhance site navigation, analyze site usage, and assist in our marketing efforts.
Cookie SettingsAccept All

This website uses cookies to improve your experience while you navigate through the website. Out of these, the cookies that are categorized as necessary are stored on your browser as they are essential for the working of basic functionalities of the website. We also use third-party cookies that help us analyze and understand how you use this website. These cookies will be stored in your browser only with your consent. You also have the option to opt-out of these cookies. But opting out of some of these cookies may affect your browsing experience.
Necessary Always Enabled
Necessary cookies are absolutely essential for the website to function properly. These cookies ensure basic functionalities and security features of the website, anonymously.
Functional
Functional cookies help to perform certain functionalities like sharing the content of the website on social media platforms, collect feedbacks, and other third-party features.
Performance
Performance cookies are used to understand and analyze the key performance indexes of the website which helps in delivering a better user experience for the visitors.
Analytics
Analytical cookies are used to understand how visitors interact with the website. These cookies help provide information on metrics the number of visitors, bounce rate, traffic source, etc.
Advertisement
Advertisement cookies are used to provide visitors with relevant ads and marketing campaigns. These cookies track visitors across websites and collect information to provide customized ads.
Others
Other uncategorized cookies are those that are being analyzed and have not been classified into a category as yet.
SAVE & ACCEPT
Due to the holiday we are closed until August 22.
Learn more
This is default text for notification bar
Learn more