Mandarin Spessartite Garnet is a rare form of orange garnet often referred to as Mandarin Garnet for its vivid orange color. These gemstones actually occur in a range of colors from yellowish orange to reddish orange and orange-red. The combination of vivid color and garnet’s very high refractive index make mandarin spessartite garnet one of the most brilliant gemstones in the world of colored gemstones.

The pure orange, known as mandarin or fanta orange, is very rare and has been found in only a few deposits in Nigeria. These top spessartites are sought after by. Very little in the way of new material has been found recently, but we at Atelier de Beer were lucky to buy some excellent gems from the original find. 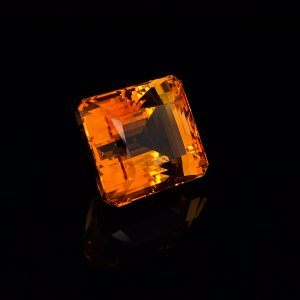 The value of mandarin spessartite garnet varies according to the size and quality of the gemstone. Color and clarity are the most important determinants of value. The vivid orange color is the most valuable, especially if they are flawless and larger in sizes. The reddish and orange and orange-red are also valuable if they appear in fine quality. Gems with a distinct brownish secondary hue, or heavily included stones, are less valuable.

We at Atelier de Beer have access to the most rare and unique gemstones, please feel free to contact us.

By clicking “Accept All”, you agree to the storing of cookies on your device to enhance site navigation, analyze site usage, and assist in our marketing efforts.
Cookie SettingsAccept All

This website uses cookies to improve your experience while you navigate through the website. Out of these, the cookies that are categorized as necessary are stored on your browser as they are essential for the working of basic functionalities of the website. We also use third-party cookies that help us analyze and understand how you use this website. These cookies will be stored in your browser only with your consent. You also have the option to opt-out of these cookies. But opting out of some of these cookies may affect your browsing experience.
Necessary Always Enabled
Necessary cookies are absolutely essential for the website to function properly. These cookies ensure basic functionalities and security features of the website, anonymously.
Functional
Functional cookies help to perform certain functionalities like sharing the content of the website on social media platforms, collect feedbacks, and other third-party features.
Performance
Performance cookies are used to understand and analyze the key performance indexes of the website which helps in delivering a better user experience for the visitors.
Analytics
Analytical cookies are used to understand how visitors interact with the website. These cookies help provide information on metrics the number of visitors, bounce rate, traffic source, etc.
Advertisement
Advertisement cookies are used to provide visitors with relevant ads and marketing campaigns. These cookies track visitors across websites and collect information to provide customized ads.
Others
Other uncategorized cookies are those that are being analyzed and have not been classified into a category as yet.
SAVE & ACCEPT